[Inside Look] How I Use Dark Pool Activity

For quite some time now, I’ve been following some of the largest players on Wall Street… trying to piece together the puzzle and figure out where they’re placing their bets.

You see, I believe the financial institutions place their large trades in the dark pools.

Well, when they place large trades in the dark pools… it actually may not impact the market price. So it’s as if they can trade covertly without the public market figuring it out because these trades aren’t placed traditionally.

So how does this information help me identify opportunities?

Exposed: How I Uncovered A 40% Winner By Following Dark Pool Activity

When it comes to dark pool activity, I use a proprietary scanner that lets me know where massive block trades are going off.

I believe it’s helpful with an example.

A few weeks ago I noticed some large block trades go off in Slack Technologies (WORK).

Here’s what I sent out to my subscribers the day I saw the dark pool activity?

In the morning I saw some big trades in WORK as I mentioned in my email yesterday.

As a result, I bought the June 19 $30 calls at $3.70 as WORK has broken above its recent resistance of $30 and has squeezes on several time frames. 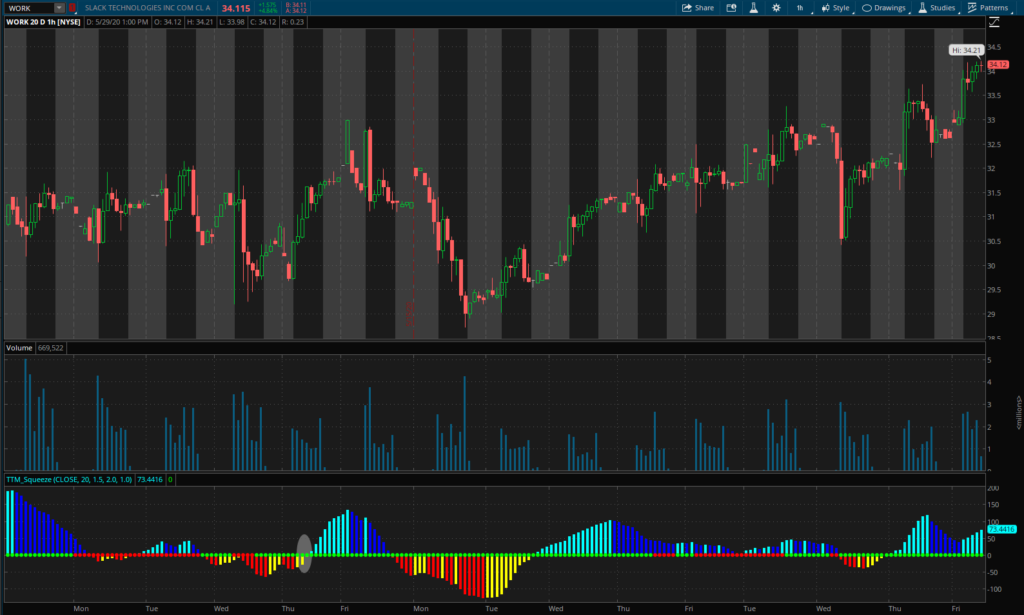 The dark pool activity let me know someone was getting into WORK shares. However, I needed some more conviction…

So I looked at the chart to see what was going on.

When I checked out the different timeframes, there were squeezes firing off.

By squeezes, I mean the TTM Squeeze.

First, there was a clear trend, as the stock was trending up on the daily chart.

Second, the stock was just coming out of a consolidation pattern.

Third, I noticed a squeeze, as shown in the hourly chart above. That let me know the stock was ready to make a move.

Now, the next day after I saw the initial dark pool activity… I sent this out to subscribers.

In the afternoon I saw another big trade go through in WORK as I mentioned in my email yesterday.

With the “smart money” piling into WORK, I figured this stock could pop…

Maybe they knew something I didn’t…

Or maybe they had a high-conviction about the stock going up.

Whatever the case may be, I did my due diligence and didn’t just follow the smart money activity blindly.

Now, instead of buying shares outright, I actually scooped up calls.

It was more efficient for me because I can get more bang for my buck. Not only that, but if WORK made a small move… my profits can be larger than if I purchased the stock. 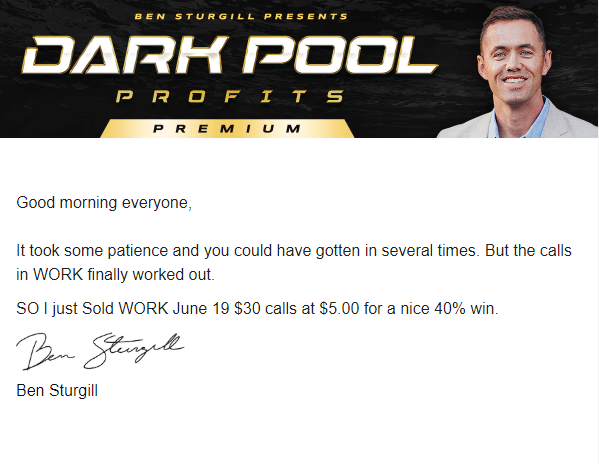 I’ll continue to monitor the dark pools for potential trades ideas, and if I come up with something… I’ll be sure to let my subscribers know about them.

The race for a vaccine and treatment for the coronavirus is speeding up. There are so many companies out there researching and developing potential treatments, that it’s often hard to find which ones are the clear leaders. With so much riding for biotech and...

Dark pool activity has been heating up… and that means more “smart money” ideas to take advantage of. For quite some time, I’ve seen a slew of large bets being placed in the dark pools… And some of these have been monster trades. The other day, I mentioned a trade...

PINS Hits Target, Did Someone Know About The News?

The other day I dimed out a trade idea in Pinterest (PINS). Here’s what I mentioned…     PINS continues to look like a strong one having trended up for the past several months bouncing off the 50 sma on the day again just yesterday. I would like to see PINs...

Could Pinterest (PINS) Give FB A Run For Its Money?

You’ve probably seen the headlines by now… Companies are pulling their advertising from Facebook (FB) — putting the company’s revenue at risk. While that’s bad news for FB… it’s great news for smaller social media platforms, such as Pinterest (PINS). These companies...