PINS Hits Target, Did Someone Know About The News?

The other day I dimed out a trade idea in Pinterest (PINS).

Here’s what I mentioned…

PINS continues to look like a strong one having trended up for the past several months bouncing off the 50 sma on the day again just yesterday. I would like to see PINs break $22.50 with a target of $24.50.

The reason for the pop?

Although I didn’t trade PINS, I want to show you the process I used to uncover this quick winner… and why I believe it’s so important to follow dark pool activity.

Now, if you refer to the dark pool activity…

Here’s how I look at it.

To me, if someone is placing an order in the after-hours…

That’s worth $28.93M, it probably means it’s a financial institution, hedge fund, or just someone with a large financial backing.

If you know anything about these players, they have an unfair advantage, in my opinion…

You see, they have so much money, they can spend a lot of money on research and technology.

It’s not a level playing field…

And that’s why I use a dark pool scanner.

Chances are, whoever is placing a bet in the dark pools would be considered “smart money” and elite traders.

That means I can see where they’re placing their bets.

However, that doesn’t mean I’m following them blindly… I actually conduct my research.

With PINS, there was actually news in the social media space.

Facebook received a lot of backlash from its control of hate speech on its platforms… and some advertisers pulled their spend.

Well, although the catalyst I thought of wasn’t right…

There was some news…

Facebook announced it confirmed its plans to shut down Hobbi, PINS competitor.

That means more market share for the stock… and potentially more revenue.

Consequently, the stock exploded on Wednesday and continued its run on Thursday… 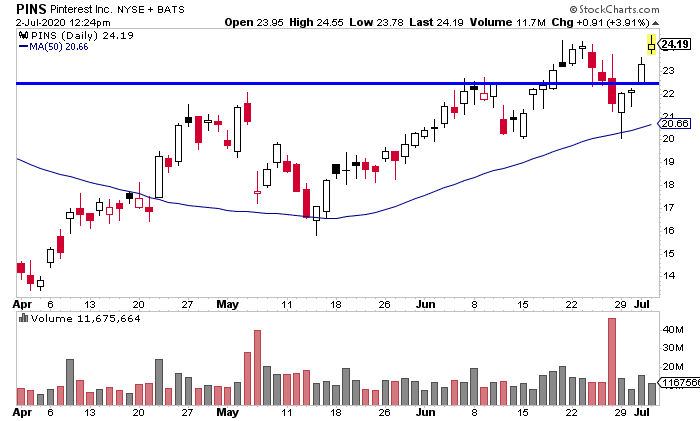 The stock hit the target of $24.50… and for those who took the trade idea, I’m so stoked… even though I didn’t take it.

PINS could continue to run from here if FB continues to lose companies advertising on its platforms.

Now, if you want to receive my watchlist and alerts to learn how I use dark pool activity to my advantage… then click here and join now.

Yesterday was the worst sell-off the market witnessed in three months… And it was actually one of the top 25 worst performances in history. Of course, there’s been an influx of new retail traders who have just been buying random stocks left and right… And that was a...

Stocks have been pretty crazy lately… I mean take a look at some of the wacky moves in some companies that are going bankrupt. Right now, there’s a lot of noise, in my opinion… And I think now’s the time to only focus on high-conviction trade ideas. For me personally,...

3 Stocks On My Dark Pools Watchlist

What a crazy market it’s been recently… I mean stocks are close to highs… and right now it seems as if everyone and their brother are betting on the economic recovery. Heck, Hertz Global Holdings (HTZ) traded above where it was before declaring bankruptcy on Friday....

You probably already know by now that dark pools offer powerful information. Heck a few weeks ago, I mentioned to my subscribers how I kept noticing Caesars Entertainment Corp. (CZR) come up on the proprietary dark pool scanner I use. Here’s what I sent out this...

[Inside Look] How I Use Dark Pool Activity

For quite some time now, I’ve been following some of the largest players on Wall Street… trying to piece together the puzzle and figure out where they’re placing their bets. You see, I believe the financial institutions place their large trades in the dark pools. Why?...